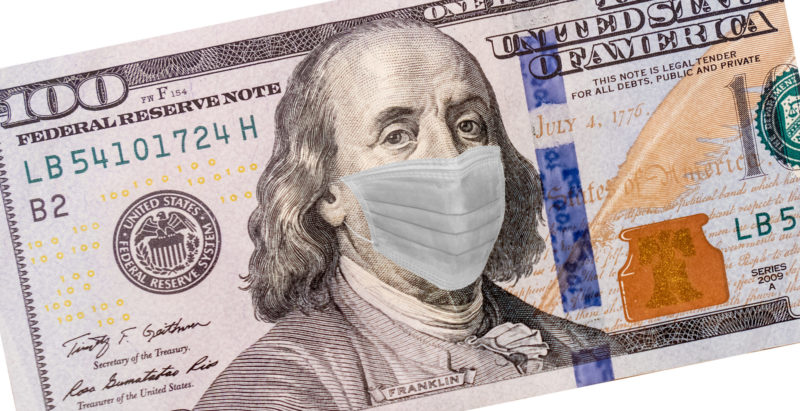 Since 1944, the US dollar has been the world’s reserve currency. This status has meant it is held by central banks for investments, transactions, and debt consolidations, as well as influencing the exchange rate.

While this has been the way for decades, it seems the impact of the global pandemic is now having an effect on the dollar, causing this key currency to stumble. But how much trouble is the US dollar in? What does this mean for the global economy? And what led to this point?

To look at where we are now, it’s worth looking back. During the second world war, the US joined the fight alongside the Allies and was paid for its services in gold. This led to the United States being the largest holder of gold in the world.

In 1944, Allied countries met to devise a foreign exchange system. This couldn’t be linked to gold, but it could link to the US dollar, which was linked to gold thanks to the payments received during the war. From there, the Bretton Woods Agreement established that the central banks would have fixed exchange rates between their currencies and the dollar, making the US dollar the world’s reserve currency.

Today, forex traders and stock market investors are seeing a slump in response to the pandemic. For those who closely follow these movements, these changes are seen as ominous as a depreciation of the world’s leading currency is a rare event.

This currency is at a two-year low and dropping against long-established benchmarks such as gold and silver, along with other key currencies.

As the dollar weakens, there is a knock-on effect with other currencies around the world. On the one hand, it could be that financial managers have used the virus as an opportunity to move away from the US dollar in a bid to find an alternative that’s producing a yield.

But there seems to be more to the decline than that. There is a lack of confidence in currencies across the board, and this could ultimately have an impact on financial markets around the world. In the past, thanks to the US dollar being the key currency, these markets have sought the support of this currency, often in the form of bailout loans and currency exchanges.

There have been examples of this before and a weak dollar can be seen as a positive for those with shares of companies that generate the majority of their revenue overseas. However, while in the past when we’ve seen the dollar fall, there have been positives among the negatives, there was a silver lining in that the global economy had a promising outlook.

As the coronavirus continues to be a global concern and without being able to predict what’s to come, it’s impossible to say where we are headed.

This content is brought to you by Daniel Bailey.

The post Is the Status of the US as a Global Currency in Danger? appeared first on The Good Men Project.

A tenor ukulele is a wonderful music instrument that allows you to enter the world of sound
February 28, 2021

Besides tuition fees, the other major cost that every college student must take care of is housing
February 28, 2021

This is the age old debate over the economics of the small holder.  It will continue for a while yet until we have the full use of robotic farm workers.
February 28, 2021