I thought I had today all figured out.  I needed to go to the grocery and to stop at a friend's porch to drop off some charity knitting and pick up a few books for LC.  I did the porch stop first and got a small handful of books, then went right to the grocery.  See my plan was to be at the grocery when the Packer game started.  I figured that most people would be at home watching the game so it wouldn't be as crowded.  Unfortunately I wasn't the only one who thought that.  The aisles weren't exactly crowded but there were six checkout lines open and each one had three or four people waiting.  Of course with social distancing the waiting lines were strung out across the store departments.  Not my best plan.  And the couple ahead of me in line needed a price check and an override which took long enough that the cashier took $5 off my bill for the delay.  That was a nice surprise. 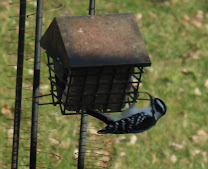 This Downy Woodpecker came to the suet feeder today.  I like how she cocks her tail under the feeder which helps her keep her balance.

Spending the afternoon with Pastor Davis made me anxious to see what, if anything, was in the safe deposit box at the bank.  The next morning, I dressed in my nicest shorts and top and drove into The Valley to the Scotiabank.  Arriving right as they opened, I went in and asked to speak to the manager.

After a short wait a middle-aged man came out of an office in the corner and walked toward me.  “Mrs. Lambert?  I am Charles Larkin.  How can I help you?”

I stood and shook his hand.  “How do you do, Mr. Larkin.  I’d like to talk to you about safe deposit boxes.”

He took my elbow to steer me into his office.  “We have a variety of sizes of safe deposit boxes,” he began, but I interrupted.

“I’m not interested in having a box at this time, but I have an old passbook and what I think is a key for a safe deposit box.”

A frown wrinkled his forehead.  “We do not allow non-box holders to open them even if they have the key.”

I put my hand on the edge of his desk.  “Of course not, and I’m not even sure if the box is still in Mr. Reynolds’ name.  It’s been over forty years since he was on island and I know that if the rent isn’t paid the bank clears it out and re-rents it.” I reached into my bag and pulled out the passbook and iron ring of keys.  Sorting through the skeleton keys and brass keys, I came to the small key that I thought was for a box at the bank.  “Is this one of your keys?”

Mr. Larkin took the key from me and nearly dropped the ring.  “This is heavy,” he said.

“Yes, I don’t carry it around with me often.”

He turned the key over and peered at the number stamped on it.  “Four seventy-three,” he said.  He pulled a ledger off the shelf next to his desk and thumbed through pages until he found the listing for that number box.  “It says the box is rented to a Mr. Abram Reynolds.  The rental fee was prepaid for fifty years, which expires in three more years.”

My spirits lifted at the news.  “Can we open the box?  I have the key.” I had my fingers crossed in my lap. I didn’t think he could see over his desk.

“W-e-l-l,” he dragged that word out so far I nearly exploded, “I imagine that we could open it.  Since you have the key and are the new owner of the Seaview. Excuse me for a moment.” He stood and left the office.

I thought he needed the restroom, or some emergency popped up but then I realized that he had my ring of keys.  I craned my neck to see if I could find him or where the private cubicle for box holders to sort through their things might be, but I didn’t see him or a private space.  He popped out of the open vault with a gray metal drawer with a locked lid cradled in his arms.  He carried it back into his office and laid it on the desk.  “I will leave you alone to open it.” He handed me the keys.  “I will be right outside at the teller counter if you need me.”  He gave a little bow and left the room.  He didn’t close the door, but I did.

I wanted to look through whatever was in there by myself.  Of course, with one whole wall of glass the office wasn’t closed to interested eyes.  I stood up and lifted the flat metal lid of the box. It wasn’t full.  Too bad.  There were a few papers and a fishing lure.  Why would someone put a lure into a safe deposit box?  Maybe one of the papers would give me a clue.  There were more love letters from more than one woman.  I snorted.  Trophies, I thought.  What a creep.  Under the letters was the actual photograph of Hemingway and another man with a marlin on a dock in front of what I now saw was the Seaview.  Cool.  I had proof that Ernest Hemingway had been in my hotel. I took a closer look at the fishing lure.  A name was scrawled on the silver side of the fake fish, Ernest Hemingway.  This must be the lure that he was using when he caught the marlin and gave it to Reynolds as a souvenir or as a thank you for a successful fishing trip.  I wonder if I could find a shadowbox picture frame someplace on the island so that I could display the photo and lure in the lobby. I wished there was a letter too.  I thought I’d leave it all in the safe deposit box for the time being and read the letters I’d found in the hotel to see if one was from the famous author either making the reservation or thanking him for the stay.

I waved to Mr. Larkin and when he came back into his office asked if I could leave the items in the box for now and even bring other items to place them in there for safe keeping.

“That will be fine.  I can change the name on the box to yours since the address of the box holder has not changed.” He patted my hand.

I thought that was unorthodox but agreed.  Then I pulled out the old passbook but, as I suspected, the account was closed.  While I was there, I opened an account in the bank to have an on-island bank that my hometown bank could transfer money to as I needed it.  When I left, I realized that I had just sunk another root into the sandy soil of Anguilla.

Today's toss was a real toss.  I tossed a sleeve of magazines right into the recycling.  I don't know why I kept them, I don't go back to go through them again.

I didn't sit down to write until after supper but managed  to get just enough words piled up to meet the quota.  I'm not saying it's getting easier but it's a little less of a slog the last few days.

Our fitness expert found the best gym shorts for men to fit every budget and workout
February 17, 2021

How to Safely Store Your Personal and Financial Information as an Older Adult
February 06, 2021